At the Suffolk Veterinary Group Animal Wellness & Laser Surgery Center, we understand what life is like with animals because we have pets too!  Would you go to a pediatrician that didn’t have children?  We’d like to introduce you to the companions that keep teaching us more about what you need from your Veterinary Team to help you keep your special companion healthy. 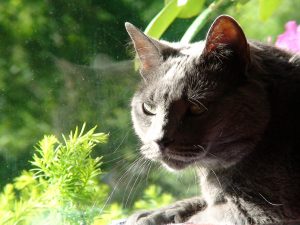 Residing with Dr. & Ms. Winkler, Famosa came into their lives at about a year old after a stint in foster care.

When she’s not modelling herself for website photos, she enjoys being curled up in the sunshine of the front window, or next to her two favorite buddies.  She’ll never let on that she’s twelve years old with the youthful way she plays with her toys, or chases the laser pointer. 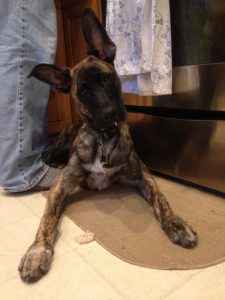 After many years without a canine companion in their family, The Winklers became the proud puppy parents of a Boxer-German Shepard Mix they named Hicks.  Being born on a 13th day must have influenced his goofy personallity, as he is always causing or getting into trouble when he chases the rabbits or steals food from the counters.  Hicks brings smiles to everyones’ faces with his tricks, and he loves getting cookies from all the people he meets.

Abandoned in a carrier outside of Suffolk Veterinary Group on January 30, 2013, Frostbite earned her name through a damaged right ear where the scar tissue grew back white fur instead of black, and being speckled with enough dandruff to look as if someone had dusted her with snow.  After getting her on a nutritionally complete diet, her dandruff cleared up, and it was determined she was about 10 years old.  Frostbite considers herself the luckiest black cat ever for having lived in the Winkler Household, and knowing so much love and kindness. Frostbite passed away in the spring of 2015 from a rapidly growing lung cancer, and is remembered with the planting of a lilac bush in the Winkler yard.

Font Resize
Contrast
Accessibility by WAH
Call Us Text Us